The third highlight during our fantastic visit  of ArianeGroup Les Mureaux on November 21 after visiting the main assembly hall of the main stage of the ESA launcher Ariane 5 and the SYLDA double launch structure was to have a look into the future. The new ESA launcher Ariane 6 was introduced to us by engineers and managers actually working on the Ariane 6 launcher project. As you can imagine this was a fabulous event for me because I am known as the biggest (but small in size) fan of the Ariane 6 launcher. 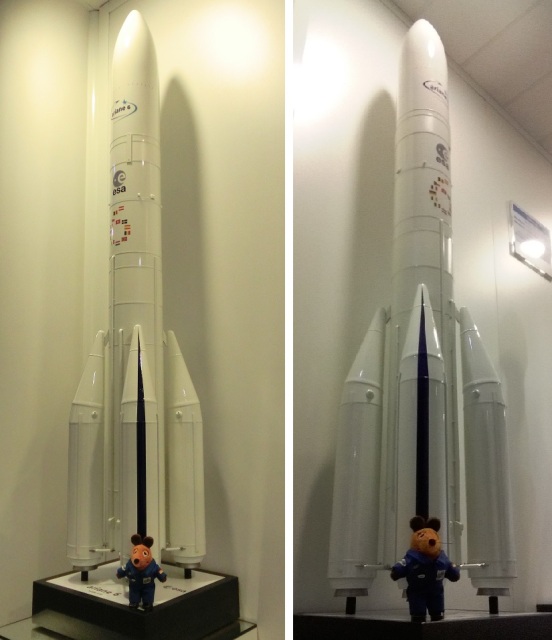 This is a super cool Ariane 6 model that I found while visiting ESA Space Transportation at ESA HQ in Paris. In Les Mureaux we did not see any Ariane 6 model for some reason unknown.

The construction site for the assembly complex for the main stage  of Ariane 6 in Les Mureaux. The assembly of the first Ariane 6 main stages is planned to start within a few months.

Next was to learn more about Ariane 6 during a presentation about Ariane 6 and the current status of the development of this launcher. The two different versions of Ariane 6 – the A62 version with two Solid Rocket Motors (SRM) for medium sized payloads – and the big A64 version with four SRMs for heavy payloads – were introduced to us in quite some detail. The two versions of Ariane 6 will enable to launch a wider range of payloads in comparison to Ariane 5.

In the following you can have a look at some of the slides of the presentation given to us:

The two versions of Ariane 6 can be launched up to 12 times per year. 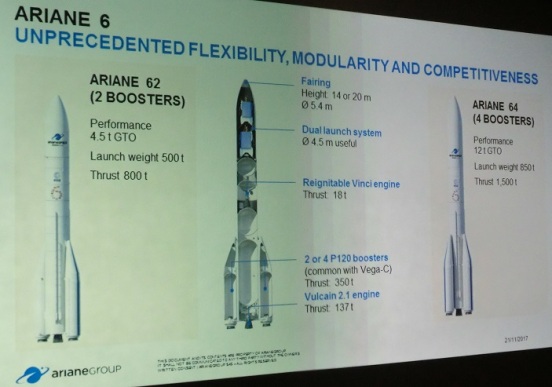 The medium A62 variant of Ariane 6 with two Solid Rocket Motors (SRMs) can transport at least 4.5 metric tons of payload to GTO (Geostationary Transfer Orbit). The heavy A64 version with four SRMs will be able to lift at least 12 metric tons to GTO. This beats the payload capacity of the current Ariane 5. 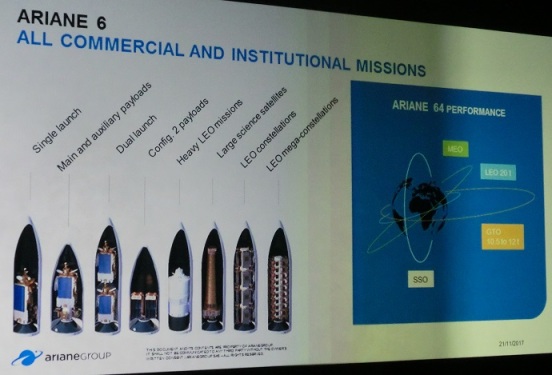 Ariane 6 will be able to launch very different payloads. This will be enabled by the two versions of Ariane 6, the SYLDA double launch unit, two versions of the payload fairing and several dispenser systems to launch satellites for big constellations.

These are the slides showing the current status of the development of Ariane 6. Ariane 6 has started to become real: 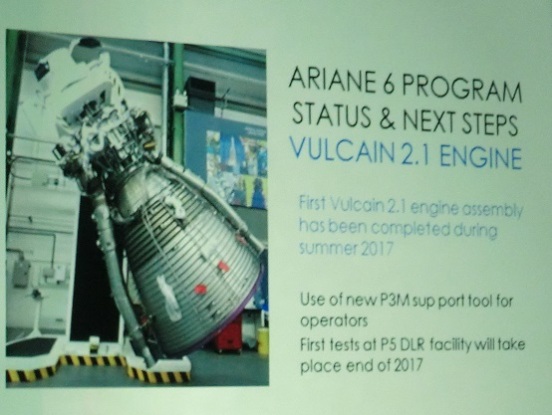 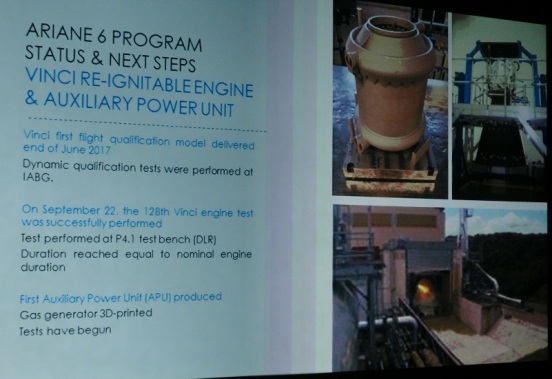 The Vinci engine for the Ariane 6 upper stage has been tested already for several years. For a small 3D printed engine tests have started. 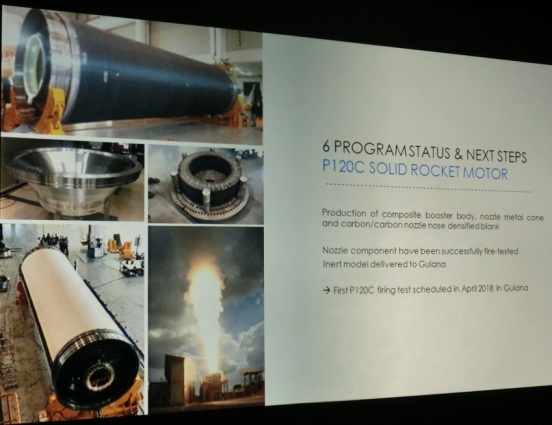 The first test unit of the Solid Rocket Motors has been assembled. A first test firing is planned for April 2018 in Kourou.

The launch preparations for the new Ariane 6 launcher at the European spaceport in Kourou were explained to us as well: 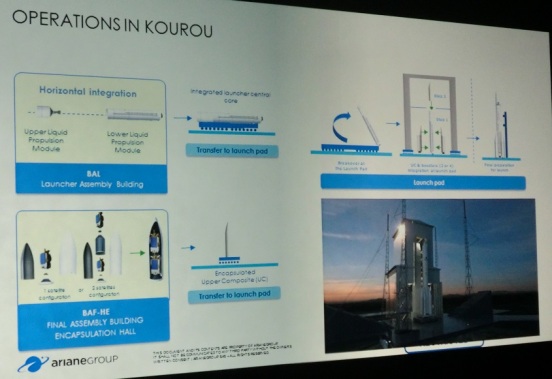 Main and upper stage of Ariane 6 will be processed and transported horizontally in Kourou. They will be erected at the launch pad.  Solid Rocket Motors and the fairing including payload will be installed at the launch pad with help of the facilities of the Mobile Gantry.

Finally we had the pleasure to view a demonstration of the 3D program used for designing Ariane 6. During this part of the event details of the functions of the different Ariane 6 elements were explained to us. Here are some impressions from this presentation:

A Solid Rocket Motor for an Ariane 6 as seen in the 3D design program. The image is not blurred. You need 3D glasses for enjoying the 3D effect. 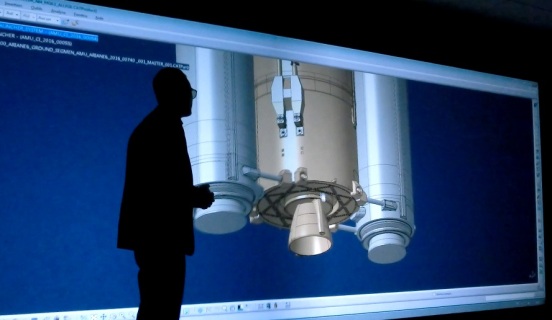 The lower section of an Ariane 6 A62 with two SRMs as seen in the 3D design program.

The SYLDA double launch unit will also be used for Ariane 6. A new long version of the SYLDA will allow to launch two big satellites of the same size.

The final part of our visit of ArianeGroup in Les Mureaux was a great Q&A session with four experts and engineers. We were allowed to ask any question related to Ariane 6. Obviously I had several questions by myself. Additionally I had collected interesting questions from some friends on Twitter and Facebook. All our questions were answered. Many thanks go to the experts: Michaela, Mathieu Chaize, Simon Debeugny and Guillaume Collange.

These four Ariane 6 experts of ArianeGroup were answering our questions during a fantastic Q&A session.

After this great Q&A session our fantastic visit of ArianeGoup in Les Mureaux was coming to an end.  Many thanks to all involved! It was a great day in Les Mureaux. It was a great honour to be invited to this event. It was mindblowing to be allowed to take pictures and videos of almost all the very interesting things at the site.  Many thanks ArianeGroup! Merci beaucoup!

And we hope to be allowed to return to Les Mureaux next year when the production and assembly of the first Ariane 6 main stages has begun. We would love to report about these historic events to come!

P.S.: Some interesting info from the Q&A session with the ArianeGroup staff I would like to add:

Part I: Visiting the huge assembly hall for the Ariane 5 main stage